A Theology of Leftovers & How to Feed Your Hungry Soul 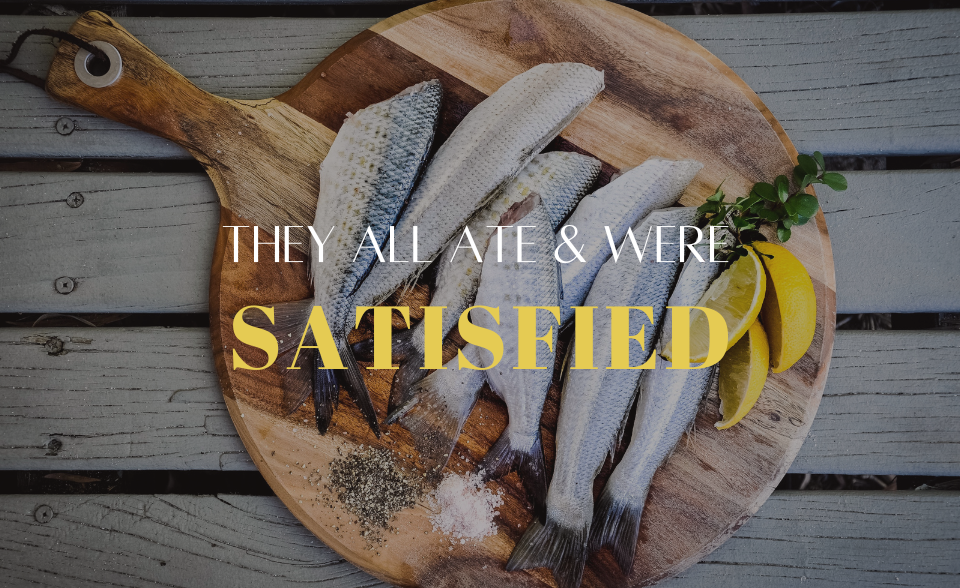 The waning rays of daylight glittered across the Sea of Galilee. People were scattered as far as the eye could see along the grass that hugged the shoreline. The masses had come from the surrounding villages to hear, see, and hopefully be touched by the miracle-working Jesus of Nazareth.

But the pleasantness of the afternoon began to fade with the sun, as the crowd grew restless and hungry. Tummies rumbling, children crying, and a mass of humanity with more needs than the disciples had denarii to feed. The only logical solution was to send the crowds away hungry.

Or so the disciples thought…

They had no leisure to eat

Before Jesus and his disciples had found themselves surrounded by thousands of hungry people, they had come away from one of the busiest seasons in their ministry. A few days earlier, the twelve had returned from their first missionary journeys, eager to share their stories of triumph in the field. But their exuberance quickly turned to grief as they received the news of John the Baptist’s murder.

But there was little time to grieve as their ancient-day Google calendars were packed with appointments and needy people. If their view of success had any resemblance to our modern one, their overwhelming busyness might’ve led them to believe they had arrived. Jesus’ popularity was soaring, and the turnstile was constantly spinning at their home base of operations. Undoubtedly, major kingdom-building progress was taking place. But in the midst of their success, Jesus called a time out.

“Come away by yourselves to a desolate place and rest a while.” For many were coming and going, and they had no leisure even to eat.

Jesus’ invitation to step away from the madness was probably more welcomed than we can imagine, but it would be short-lived. Their pace was unsustainable, and the desolate place that promised reprieve was interrupted by the crowds who were once again, hot on their trail.

What are they among so many?

We don’t know if the disciples’ suggestion to send the crowds away was motivated by their obvious lack of supplies, fatigue, hunger, or all of the above. But if the disciples saw the crowds as a nuisance, the Lord of Hosts saw an opportunity to be the Host of Hosts to a mass of hungry people.

But questions and doubt still loomed in the disciples’ minds. How could they possibly feed this hungry crowd? There was no human solution to the divine problem the Lord had placed them in. But now was not the time to dwell on the impossibilities. Jesus sent them into the crowd to take inventory.

One boy offered his lunch of five flatbread crackers, and two sardines. It was a snack for one when they needed meals for 20,000. The contribution was a smoldering wick, that Andrew quickly snuffed out when he responded, “What are they among so many” (John 6:8-9)?

Don’t we often feel this way when we look at the seemingly impossible situations we face in life? We have limited energy, resources, knowledge, experience, and even faith for the needs that loom large. Yet we can say like the little boy, “Lord, I don’t have much, but here, take my sack lunch and do with it what you will. It’s yours.”

Our offerings may be far too small, but that’s ok. By God’s grace, he takes what would otherwise be deemed insufficient, and does exceedingly abundantly beyond all that we can ask or think (Eph 3:20, NKJV).

Just like he did with the little boy’s lunch that day by the sea.

“And taking the five loaves and the two fish, he looked up to heaven and said a blessing and broke the loaves and gave them to the disciples to set before the people. And he divided the two fish among them all. And they all ate and were satisfied.”

Whatever we give to the Master of the Feast, is more than enough supply to meet the demand.

In God's economy subtraction is offset by addition, and division is countered by multiplication.Click To Tweet

A theology of leftovers

It’s interesting that the only miracle, aside from the resurrection, that’s recorded in all four gospels, is the feeding of the 5,000. Perhaps it’s repeated because it was such an undeniable display of the deity of Jesus Christ. Or because we can all identify with the doubting disciples who struggled to make sense of Jesus’ command, “You feed them.” Or perhaps it’s repeated because we can see ourselves in the crowd, not really sure what’s happening, but following along for the free lunch.

The lessons we can learn from this story are more numerous than the loaves and the fishes themselves. But all four accounts also tell us that 12 baskets of leftover fragments were taken up. Why 12? Because Jesus makes plentiful provisions for all who come to him, and he makes special provisions for the doubts of those who belong to him.

The disciples arrived at their seaside retreat hungry. Hungry for food and hungry for rest. They must’ve known that with Jesus, all their needs would eventually get met, but as the events of the day unfolded, their faith was tested over and over again.

When the crowd was gone, and the clean-up was complete, did the disciples stand together with their twelve baskets of leftovers, and pause, passing a knowing smile to one another? Could it be that the Lord designed this miracle to display his power and deity for the multitudes, but also to overcome any lingering doubts his inner-most circle still had?

Each crust of bread, and half-eaten piece of fish they tossed into their basket, was a tangible reminder that the Lord was with them in their doubt, and he was enough. In fact, he was more than enough. He was exceedingly abundantly enough, with twelve baskets of leftovers to prove it.

An invitation for you

Friend, if you find yourself in a season when you’re tired, and without leisure to rest and eat, I pray this familiar story falls afresh on you. Consider the twelve baskets of leftovers as a wink and a nod from the Lord directly to you. He sees you and your busyness, and he understands the doubts you’re wrestling with. He knows your needs before you even remind him. The rest and the leisure you’re longing for are available to you in the same way it was offered to the disciples.

Come away by yourself to a quiet place, and spend time with the Lord of Hosts. His provisions are bountiful, and you’ll soon discover, that he himself is the feast. Time spent with him will satisfy your hungry and thirsty soul and fill you with what is good. You’ll come away full, and chances are, with leftovers to spare.

Hungry for more of him,

P.S. Have you ever considered the theology of the leftovers before? Had you noticed that when Jesus called the disciples away to rest, their plans got interrupted? (Rest did come…just later.) There are so many lessons we can learn from the feeding of the 5,000. What lessons have you learned from this story? Leave me a comment below.

P.P.S. Be sure to subscribe so you never miss a post. Grab a freebie while you’re at it!