Prophecy, Palm Branches, and How to Trust God's Perfect Timing In Your Life 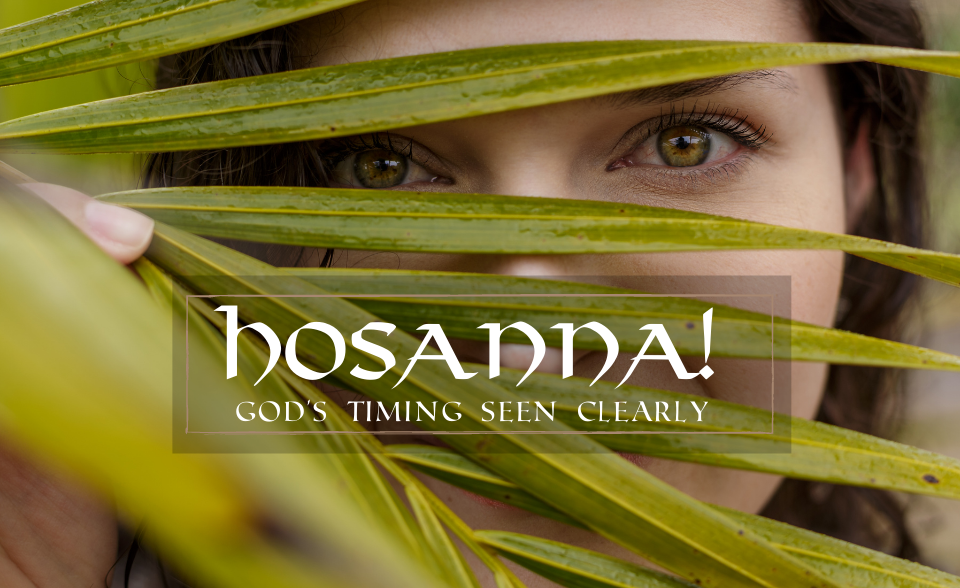 Behold, your king is coming to you,

righteous and having salvation is he,

humble and riding on a donkey,

on a colt, the foal of a donkey.

Jerusalem’s city streets swelled with people as rumors of Jesus’s arrival spread through the crowd like an ancient version of “Telephone.” Bits and pieces of conversations could be overheard among the crowd.

“Jesus is coming through Jerusalem!”

“He is the one who raised Lazarus from the dead!”

“Surely, he is the Promised One, the Messiah!”

The crowd laid down palm branches and their outer cloaks, carpeting the dusty road for the coming King. The spring air was sweet with the fragrance of cherry blossoms, and the people’s praises. A chorus from Psalm 118 rang out among the crowd, “Hosanna! Blessed is He who comes in the name of the Lord! The King of Israel!”

All creation had been waiting for this moment, and it was finally here! Jesus the Messiah, the long-awaited Son of David, was coming into his city, to be coronated as their king.

A Moment 483 Years in the Making

Throughout the gospel accounts, tensions were mounting around Jesus. As his fame and popularity grew, so did the number of his enemies. Jesus had escaped other attempts to make him a king, (John 6:15) and other attempts to kill him (Luke 4:29). But now it was time for those two events to converge. On Sunday, he was met with palm branches and “Hosannas,” by Friday, the same crowd screamed, “Crucify him!”

After three years of public ministry, it was finally time for Jesus to be received as Israel’s King. But this moment wasn’t just the culmination of the three years of his ministry or even the thirty-three years of his earthly life. This was the plan from eternity past, and the fulfillment of a prophecy given by Daniel 483 years earlier.

The Seventy Weeks of Daniel

In Daniel 9, the Israelites were nearing the end of seventy years of captivity in the Medo-Persian empire. Jerusalem lay in ruins, and Daniel was wondering what was going to happen next. He was praying when the angel Gabriel interrupted him and shared God’s vision for the future of Israel.

Gabriel gave Daniel a vision that seventy weeks were left to finish Israel’s transgression and to make an end of sins. In order to understand the timeline, there’s a bit of prophetic math involved but consider this simple equation. A week equals 7 years, not days.

“Know therefore and understand, that from the going forth of the command to restore and build Jerusalem until Messiah the Prince, there shall be seven weeks and sixty-two weeks.

According to author and researcher Sir Robert Anderson, Artexerxes’s decree to rebuild Jerusalem was given on March 14, 445 B.C (Nehemiah 2). This was the start of God’s prophetic clock in Daniel 9. To calculate 69 prophetic weeks from that date using a 360-day solar year, (how ancient Jews kept time) you’d get 173,880 days or 483 years.

What happened on April 6, 32 A.D. (also known as the 10th of Nisan by the Jewish calendar)? Many biblical scholars agree this was the very day Jesus rode into Jerusalem as Messiah the Prince!

It makes sense that Jesus would be exactly on time, doesn’t it? After all, even the pagan Wise Men had been calculating from Daniel 9 and the stars, when they brought gifts fitting for a king. They had been watching, waiting, and calculating from Artaxerxes’ command, knowing that Messiah the Prince would soon come. How telling that the pagan star-gazers had more faith in God’s word than his own people!

But consider the staggering precision and accuracy of God’s Word!

How can millions upon millions of seemingly random people, places, and events occur over a period of almost 5 centuries and align perfectly into God’s prophetic timetable? The only logical answer is that God’s Word is divine, and its claims are true. For no other book can do what God’s Word does.

Oh, the infinite mind and perfection of God! No detail is too small or too big to be outside of his knowledge or control.

Emboldened Faith for the Future

If God so knows the minor details of where a donkey is tied up, to accomplish the major details of being coronated as Israel’s King exactly on time, does he no less know the specific timing and details that impact your life?

So often we stress out trying to make things happen to fit our “perfect” timetables, that we lose sight of who’s really in control. Or we fix our eyes on our surroundings, wringing our hands at the news, losing sight of him who is before all things, and in whom all things hold together (Colossians 1:17).

Studying prophecy is more than an academic exercise to make us biblically smarter. As we study it, our faith is strengthened as we look back, and it’s emboldened as we look ahead. We remember we’re not in control, and we find that time and time again, God is worthy of our trust. This gives us confidence to happily step aside and allow God to sit on the throne of our lives.

As we live in the uncomfortable gap between weeks 69 and 70, we trust it will unfold with the same precision and accuracy of all that’s already come to pass.

So take heart, friends. God who takes care of the greater, will he not also take care of the lesser? No matter what you’re waiting on God for, he’s working all things out for your good and his glory to those called according to his purpose (Romans 8:28). So wave your palm branches, and declare him your victorious King, because he already is.

His timing is always perfect, and you can trust him with your life and your future.

P.S. How have you seen God’s perfect timing already at work in your life? I’d love to know!

P.P.S. Grab a free copy of The Wonderous Cross Coloring Book below.