To Live a Purposeful Life, You Need Just One Thing 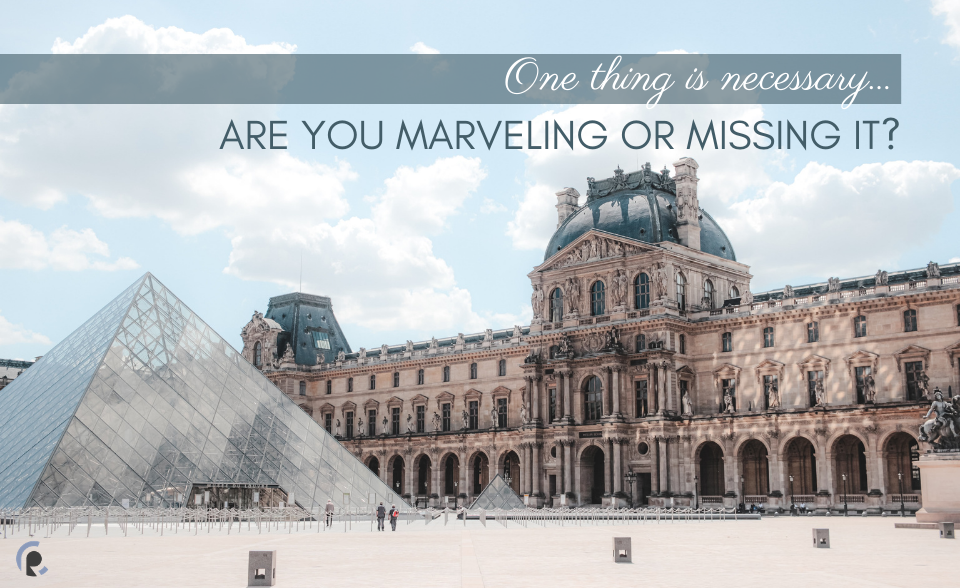 “Martha, Martha, you are anxious and troubled about many things, but one thing is necessary.”

A long time ago, before we had children, or Google maps, my husband and I went to Paris. We meandered through the city streets with our dogeared Rick Steves’ travel guide and broken French, and ate as many baguettes as possible in three days.

Of all the sites I wanted to see, the Louvre Museum had captured my imagination most. I pictured walking up to the Mona Lisa, peering over the sea of heads, and even squinting to see it behind it’s plexiglass shield. Many people had told me the anticipation and the reality of seeing it were two different things.

But for me, the point was being there. I wanted to stand before the same canvas that Leonardo da Vinci (and millions of others) had stood before, and marvel at it. I wanted to get lost in the halls of the Palace and feast my eyes on some of the greatest works of art in the world.

So Far, and Not So Good

On the morning of our visit, with our francs in hand (I told you it was a long time ago), we walked up to the counter to purchase our tickets. The attendant told us rather too matter-of-factly, the Louvre was closed because the workers were on strike. Oh, and don’t bother going to the Musée D’Orsay, they’re on strike too. Was I on a hidden camera show or something? It felt like a cruel joke, as I stood there trying to absorb the news. Over two decades later, I’m still not over it. I had come so far, and was so close, and yet I missed it entirely.

In Luke 10, we read the familiar story of Martha and Mary. They had invited Jesus over to their house, and Martha, in the midst of her serving, missed the greatness of the moment. Her sister Mary, however, didn’t miss the majesty of the moment, and sat transfixed at Jesus’ feet.

Martha probably tried to get Mary’s attention by sighing loudly from the kitchen, and shutting the cupboard doors a little too forcefully. When her subtle cues failed, she went for the direct, more tattle-tale approach. “Lord, do you not care that my sister has left me to serve alone? Tell her to help me” (Luke 10:40).

“The Lord answered her, ‘Martha, Martha, you are anxious and troubled about many things, but one thing is necessary. Mary has chosen the good portion, which will not be taken away from her” (Luke 10:41-42).

Only one thing was necessary, and it was worship. The dishes, clean floors, and delicious food weren’t important, compared to marveling at the feet of Jesus. Jesus essentially said, serving me is great, but worshipping me is better. Mary chose to marvel at his words, and soak up the warmth of being in his presence.

Jesus wasn’t asking Martha to neglect her responsibilities, but he was poking at her priorities. Maybe we’re quick to defend Martha, because this pokes at our priorities too? So we should ask ourselves, what do we prioritize, and where does marveling at Jesus’ feet rank on that list?

Scripture offers us a lot of examples of people with a single-hearted devotion to God. David was a passionate man. While he often misdirected those passions, he desperately wanted to behold more of God. In Psalm 27, he recognized that his one all-consuming desire was to dwell with God and worship him. He said,

“One thing have I asked of the Lord, that will I seek after: that I may dwell in the house of the Lord all the days of my life, to gaze upon the beauty of the Lord and to inquire in his temple” (Psalm 27:4).

When a man born blind received his sight after Jesus put mud on his eyes, the Pharisees demanded an explanation for the Sabbath day miracle. The formerly blind man was seeing things come into sharp focus after his encounter with Jesus. He not only read the facial expressions and body language of the Pharisees, but he also saw a political set-up taking place.

“He answered, ‘Whether he is a sinner I do not know. One thing I do know, that though I was blind, now I see’”

Later Jesus ran into him again and asked him if he believed in the Son of Man? He said, “Lord, I believe, and he worshiped him” (John 9:38). His encounter with Jesus not only gave him physical vision, but spiritual vision. Jesus was now his one focus.

Paul had a singular vision for his life too. He didn’t bank on his pedigree, or past successes. He had one all consuming purpose. He said,

“Not that I have already obtained this or am already perfect, but I press on to make it my own, because Christ Jesus has made me his own. Brothers, I do not consider that I have made it my own. But one thing I do: forgetting what lies behind and straining forward to what lies ahead, I press on toward the goal for the prize of the upward call of God in Christ Jesus.” (Philippians 3:13-14).

Paul’s whole life was about one thing, pursuing Christlikeness.

One Thing You Lack

But for some, the call to one thing is too narrow, and too limiting. The rich young ruler, thinking he had kept the law perfectly, asked Jesus what he needed to do to inherit eternal life? Jesus, knowing his heart, and loving him said,

“One thing you lack: Go your way, sell whatever you have and give to the poor, and you will have treasure in heaven; and come, take up the cross and follow Me” (Mark 10:21).

The young man went away sorrowful, because he had great possessions. Living for one thing prevents us from loving a million lesser things more. Sadly, it’s the narrowness of the one thing that keeps some out of the kingdom entirely.

What’s Your One Thing?

Jesus boiled down the squabble in Martha and Mary’s home to one thing: if you’re not marveling at his feet, you’re missing the greatness of being in his presence. Narrowing our lives down to one thing is hard. The lesser things, while still important, are usually louder and more in our faces. Living a ‘one thing’ purposeful kind of life, requires discernment to choose the best thing, over lots of good things.

Like standing outside the Louvre, and never entering in, let’s not miss the opportunity to marvel at Jesus’ feet. Making him our one thing, is the one thing we need most.

P.S. A one thing kind of life begins with beholding and enjoying Jesus. This is the heart of otium sanctum, or holy leisure. If you want to set up a simple system to start enjoying sitting at the feet of Jesus, download this guide, to get started.

We had a big week this week. We launched #2 kiddo