When God Came to Dinner & Why This Truth Changes Everything 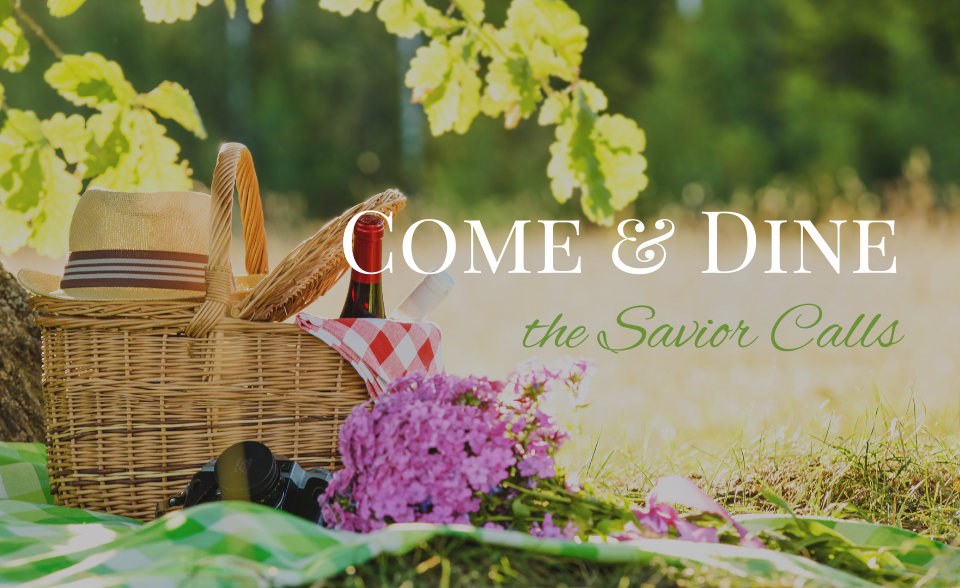 Yesterday was a diamond day. The kind that will sparkle in my memory for years to come. For a few glorious days, my husband and I have stepped away from the responsibilities that define our lives to slow down and savor the goodness of God in a quarter-century of married life.

After breakfast, we packed a picnic lunch and headed to the SoCal wine country. I naively thought wine country was confined to the North, but that’s not so. The hills of Southern California are speckled with wineries. Their lush rows of finely tended vines flourish in defiance of the bone-dry desert surrounding them.

We purchased a bottle of white wine and made our way up the hill to the winery’s picnic grounds. Under strings of cafe lights overlooking the vineyard, we ate our lunch and drank our wine. Normally, I try to reserve the overly-used ‘perfect’ for moments that truly deserve them, but this one came dangerously close.

My favorite memories usually revolve around the themes of good food, beautiful setting, and excellent company, and yesterday delivered on all three. But of the thousands of meals I’ve eaten in my life, only a rare few resurface in my memory. Not because I’ve captured those moments on my camera, but because they’ve captured me. They’ve become little diamonds, refracting new hues of color, growing more beautiful each time I turn them over in my mind.

Some moments around food are so formational to our lives that they live on in our memories long after the kitchen is cleaned. Author Jen Pollack Michel said, “I don’t want to suggest that the biblical story can be simplistically reduced to one sentence. Or maybe I do. Follow the food.”

Food, the eating of it, and the conversations around it are so prevalent throughout the Bible, that it’s almost as if the Lord wanted to show us that we’re made to do more than merely chew and swallow. Eating and drinking not only fills our physical needs but points us to our bigger spiritual and relational ones. Our souls need regular, daily nourishment from the Lord.

In Genesis, we see several instances of God’s communing with his invited guests over food. The first meal didn’t end well. Instead of feasting under the canopy of all that God had permitted, our first parents chose famine in the desert. They traded cool of the day fellowship with their Creator for banishment behind the flaming sword of the cherubim.

But by the grace of God, fellowship around the table with the Creator didn’t end in Eden. God still chose to pursue fellowship with his people, and the second course happens with God’s friend, Abraham, in Genesis 18.

When God Came to Dinner

A few times in the Old Testament the pre-incarnate Jesus shows up in bodily form, those rare appearances are called theophanies. By the oaks of Mamre, the Lord Jesus appeared outside Abraham’s tent door.

When Abraham saw the three mysterious men passing by in the heat of the day, he ran to them and offered them refreshment. They agreed to come in from the heat and Abraham set his household into action to prepare a tender calf and bake fine cakes for his guests.

With the table spread, the conversation began to flow, and the Lord revealed to Abraham that in a year’s time, his promise would come to pass that Sarah would give birth to their promised son. Sarah knew God’s promise to Abraham included a son from her womb, but after years of waiting her heart and her womb had grown cold.

The way of women had long ago ceased for Sarah, and as Jackie Hill Perry said, the only thing her uterus was shedding was dust. The promise was so outlandish that two good-as-dead people would be given the privilege of being parents in their old age, even God thought it was funny. He told them to name their son Isaac, which means ‘laughter.’

But God wasn’t the only one laughing at the promise of Isaac’s birth. When the Lord reiterated his promise to Abraham, Sarah, who was hidden behind the curtain door, laughed to herself. It was not a laugh of delight, but disbelief, perhaps an internal ‘Hmph, we’ll see about that.” But God, to whom even the musings of the heart are not hidden, heard it, even though she had uttered not a sound. In a sign of his omniscience, he called her out.

“Why did Sarah laugh and say, ‘Shall I indeed bear a child, now that I’m old?’ Is anything too hard for the Lord?’”

It’s one of the funniest exchanges in the Bible. For being afraid, Sarah defended herself from inside the tent and said, “I did not laugh.” To which the Lord replied, “Oh, but you did.”

But who can cast the first stone at Sarah for her disbelief? Humanly speaking, it was an impossible promise. When it was first given, Sarah was sixty-five years old, and at the end of her childbearing years, if not already well past them. Twenty-five barren years later, its fulfillment seemed like a wish Sarah’s heart had given up on. But in God’s economy what difference does time make? God’s question to Sarah was a gentle rebuke for her disbelief, and maybe one we need to hear too.

“Is anything too hard for the Lord?”

Come and Dine, the Savior Calls

The Lord had business to discuss that hot afternoon around Abraham’s table. There were promises reiterated and plans revealed. Over steak and cakes, the Lord reminded them to get their eyes off the clock and onto him. No matter how impossible, or laughable his promises may seem, nothing is too hard for the Lord.

What joy would’ve been forfeited if Abraham had not invited his guests in out of the midday heat! The invitation is for us too. God wants to come in and dine. Jesus said, “Behold, I stand at the door and knock. If anyone hears my voice, and answers the door, I will come in and eat with him, and he with me” (Rev 3:20).

Invite the Lord in and stay awhile with your heart and his Book open. Like Sarah, you’ll be reminded of the promises you’ve long forgotten, and you’ll be confronted by those you’ve chosen to laugh off in disbelief. You need to be reminded like I do, that God’s promises are sure, even if they seem so outlandish, they’re funny.

This is the meal your soul needs most. It will not only fill you up but it will sparkle in your memory throughout your day. It’s supposed to be an enjoyable time, kinda like lunch on a vineyard’s hill with your love.

P.S. Are you feasting or famished? Be sure to subscribe and get regular email devotions straight to your inbox!