Five Easy Steps to Spiritual Ruin, and How Being Sifted Can Give You Hope 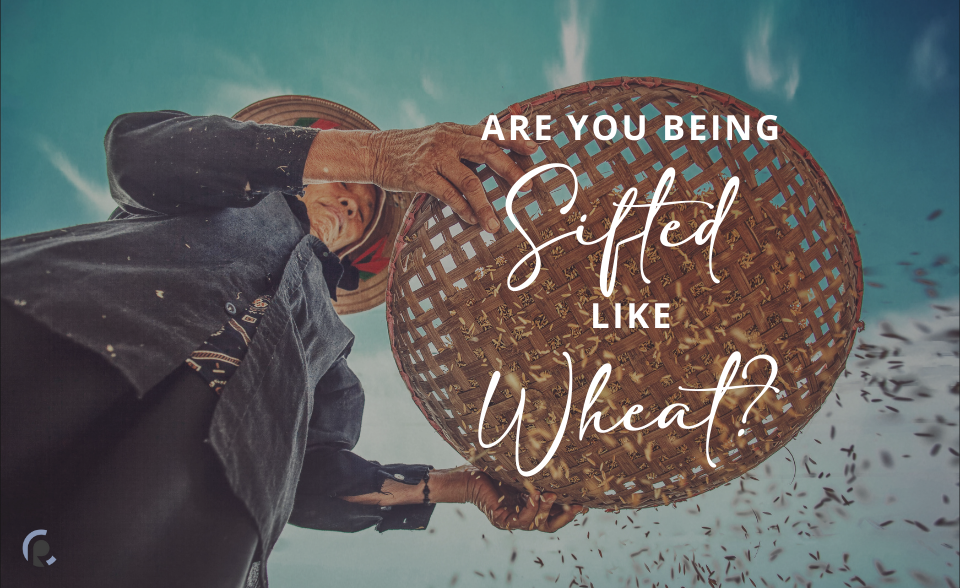 “And the Lord said, Simon, Simon! Indeed, Satan demanded to have you, that he might sift you like wheat. But I have prayed for you, that your faith may not fail. And when you have turned again, strengthen your brothers.”

The fact that God used an imperfect screw-up like Simon Peter should give us all hope. He’s a study of mountain top successes and bottom of the barrel failures. Peter is so relatable with his open-mouth-insert-foot responses, and yet it was his own willingness to be out in front, that gave him experiences no one else had. Even though he momentarily sank when he took his eyes off of Jesus, at least he was brave enough to ask Jesus to call him out to walk on the water (Matthew 14:22-33).

Jesus and his disciples were in the upper room sharing the Passover, and Jesus’ heart was heavy. He knew Judas was about to betray him, and his arrest and crucifixion were less than 24 hours away. The weight of the world was quite literally on his shoulders and the disciples started to argue.

It wasn’t an argument about theology or who got to sit next to Jesus. No, instead the men who had the greatest privilege of walking with the greatest person, were arguing about who among them was the greatest. Typical.

We can’t be certain, but surely Peter was in the thick of this dispute because after addressing the greatness debate, Jesus turned his attention squarely on Peter. He called him by his old name because he was acting like his old self.

The State of Denial

“Simon, Simon…Satan’s been demanding to have you. He wants to crush you and your faith. But don’t worry, I’ve prayed for you, that your faith will not fail, and when you return to me, I want you to strengthen your brothers.”

Return to me? Peter’s face must’ve fallen. How could Jesus say such a thing? Hadn’t he proved his love and devotion? He had left everything to follow Jesus. He adamantly responded, “I’ll never leave you, Lord! I’ll even go to prison and die for you” (Luke 22:33).

Jesus’ prophecy of his defection was full of nuclear bomb statements. Peter seemed to gloss over the fact that Satan himself had been seeking permission to sift him like wheat, or that his faith was in danger of failing. What was truly unfathomable for him was the fact that his devotion to Christ was being called into question.

But then it went from bad to worse.

Jesus said, “I tell you, Peter, the rooster will not crow this day, until you deny three times that you know me” (Luke 22:34).

First, he’d defect, and then he’d deny, not once, but three times.

After supper, the sifting began.

From the Garden of Gethsemane to the courtyard of the High Priest, Peter took five perilous steps that sifted him to his core and almost led to his spiritual ruin. Here’s what not to do when confronted with trials and temptations.

Peter had met his rock bottom.

Sifted but not Lost

Jesus had told Peter that Satan wanted to sift him like wheat. It was a graphic illustration of how Satan wanted to separate Peter (and us too) from our faith. John Piper describes the sifting like this…

Satan has a big sieve with jagged-edged wires forming a mesh with holes shaped like faithless men and women. What he aims to do is throw people into this sieve and shake them around over these jagged edges until they are so torn and weak and desperate that they let go of their faith and fall through the sieve as faithless people, right into Satan’s company. Faith cannot fall through the mesh. It’s the wrong shape. And so as long as the disciples hold to their faith, trusting the power and goodness of God for their hope, then they will not fall through the mesh into Satan’s hands.

Peter was certainly jostled and scraped up, but he wouldn’t fall through the sieve because Jesus had prayed for him. We know that God doesn’t leave his loved ones broken and crushed. “A bruised reed he will not break, and a faintly burning wick he will not quench” (Isaiah 42:3).

Even when he allows violent sifting to occur, he’s there to lovingly mend those who’ve been battered and bruised. He fans back the flame of even the faintest burning wick.

Restored for the Master’s Use

After the resurrection, Jesus restored Peter. He asked him three times (once for every denial), if Peter loved him. With his self-confidence obliterated, God began to settle Peter’s heart to do the work of strengthening others (John 21:15-19).

The lesson wasn’t lost on Peter when he later wrote…

“Be sober-minded; be watchful. Your adversary the devil prowls around like a roaring lion, seeking someone to devour. Resist him, firm in your faith, knowing that the same kinds of suffering are being experienced by your brotherhood throughout the world. And after you have suffered a little while, the God of all grace, who has called you to his eternal glory in Christ, will himself restore, confirm, strengthen, and establish you.” 1 Peter 5:8-10

Peter had been the prey of the roaring lion, but because of the prayers of Jesus, he had not been consumed.

Hope in the Mess of Extremes

Peter was a man of extremes. One moment he boldly proclaimed he’d go to prison or die for Christ, and the next minute he denied he even knew Jesus to a little servant girl. In that mess of extremes, there was hope for Peter and hope for you and me.

Those who’ve been sifted like wheat, know that out of that pain comes a sweetness of a greater dependence and love for Christ. We know if it weren’t for his prayers on our behalf, our faith would also fail.

Jesus allows this suffering to buffet us so that after a little while he can restore, confirm, strengthen and establish us, for his good purposes.

No matter what we’ve done, or how far we’ve fallen, the story of Peter’s denials reminds us there is no “ruined life” that he can’t restore and redeem.

When the sifting makes everything else fall away, we find a Savior who holds us fast through prayer. Because he holds us fast, we don’t slip through the cracks of Satan’s sieve, and that brings us unshakeable, unshiftable hope.

Because he holds me fast,

P.S. Be sure to check out my new ebook, Paths of the Righteous. It’s a 6-day devotional that looks at the lives of missionaries and witnesses for Christ, and how they experienced the rest of the Good Shepherd found in Psalm 23. I hope you’ll download a copy and leave me a review.