A Traitor's Kiss, How to Confront Betrayal as Jesus Did 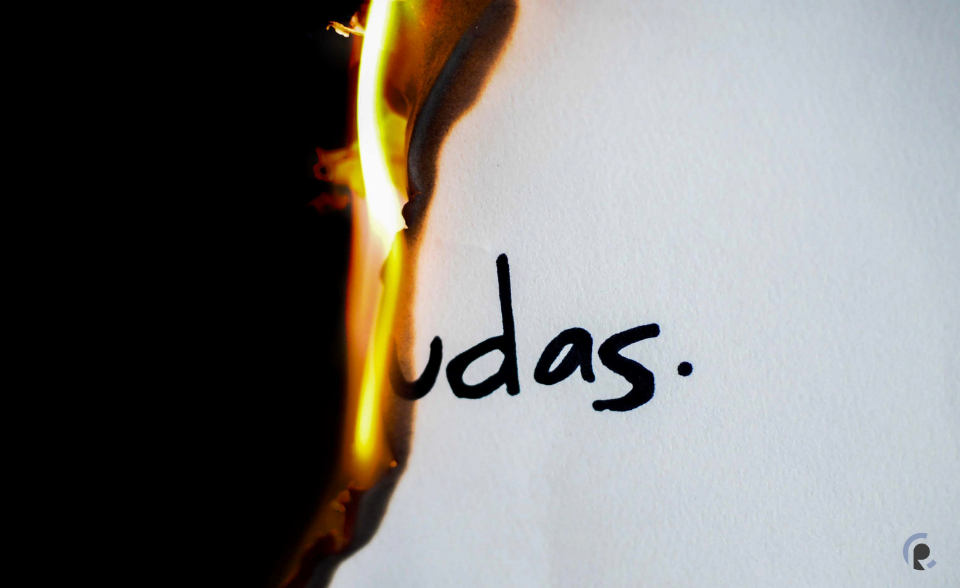 The glow from the torches and lanterns snaked along the road from Antonia’s Fortress toward Jesus and his disciples in the Garden of Gethsemane. The speckled line of light grew brighter and the marching footsteps grew louder as they inched closer.

For the third time in the last hour, Jesus roused his sleeping disciples, “Why do you sleep? Rise and pray, lest you enter into temptation” (Luke 22:46). With their hearts heavy from sorrow, and eyes heavy with sleep, the disciples struggled to make sense of the scene unfolding before them.

Judas Iscariot, who was one of the twelve, knew the place Jesus liked to go to pray. Under the cover of darkness, he led a small army into the grove of olive trees to arrest him.

The irony of Judas’ betrayal is thick.

He brought soldiers carrying torches to apprehend the Light of the World, and clubs and swords to carry away the Prince of Peace.

How could one who knew Jesus so intimately, do such a vile thing?

It’s hard to imagine a character who saw more and learned less, than Judas.

For three years, he had a front-row seat to the most spectacular display of divine power, love, and grace the world had ever known. He saw storms stilled, the dead raised to life, blind receive sight, and lame legs restored. He was a recipient of unimaginable privilege and he responded to it with unparalleled hypocrisy.

But despite all his privileges, Judas had ulterior motives for following Jesus.

He thought Jesus was going to usher in an earthly kingdom and overthrow the oppressive Roman rule over Israel. With his close relationship with Jesus, he thought if he hung around long enough, he’d rule alongside Jesus. Jesus was a means to an end, and when it became clear Jesus wasn’t overthrowing Rome, he tried to get out of the deal what he could.

Even if it was just the price of a common slave.

Betrayed by a Friend

If you’ve ever been betrayed, you can imagine how heartbreaking this betrayal must’ve been for Jesus. The Psalmist prophesied the Messiah’s angst from the betrayal brought on by a familiar friend.

“If an enemy were insulting me, I could endure it; if a foe were rising against me, I could hide. But it is you, a man like myself, my companion, my close friend, with whom I once enjoyed sweet fellowship at the house of God, as we walked about among the worshipers.”

It’s one thing when a stranger wrongs us, but the pain inflicted by a friend hurts unlike anything else. Our human response to betrayal is to retaliate, but not Jesus! When you look at all four gospel accounts together, the contrast grows between the majesty of Jesus and the monstrosity that is Judas.

If you’re suffering from betrayal, take heart, Jesus knows your pain and gives us four ways (by his grace) we can model our response to be more like his.

1. Jesus acted on his troubled spirit.

When something doesn’t sit right with us, we often make excuses for someone else’s behavior. But Jesus didn’t do that. His troubled spirit prompted him to action.

Right before he instituted the first Lord’s Supper, John 13:21 says, “…He [Jesus] was troubled in his spirit, and testified, Truly, truly, I say to you, one of you will betray me.”

Jesus, knowing all things, told Judas to leave and do his deed quickly. (John 13:27).

Obviously, Jesus knew what Judas was doing. But even if you’re unsuspecting of betrayal in your midst, listen to your gut instincts. If your spirit is troubled, dig deeper to understand why.

2. Jesus walked toward his betrayer.

Jesus therefore, knowing all things that would come upon him, went forward and said to them, “Whom are you seeking” (John 18:4)?

Jesus didn’t wait for Judas to come to him in his act of betrayal, he boldly moved towards his betrayer. And since the kiss was the pre-determined signal to identify who Jesus was in the crowd, Jesus’ motion towards Judas, made the kiss unnecessary (and even viler!). However, Judas still betrayed the Son of Man with a gesture of familiarity and fondness.

The lesson for us is not to turn a blind eye to a betrayer in our midst. It’s a sign of strength to move towards those who offend us and not shy away.

3. Jesus protected his disciples, even when under arrest.

Jesus knew that his disciples weren’t strong enough to endure being arrested, so twice he made the soldiers who had come to arrest him, identify who they were seeking. Even under duress, Jesus was looking not to his own interests, but he was protecting his disciples.

Even under life’s most trying circumstances, Jesus never loses any of his sheep. No matter how life-upending your betrayal has been, Jesus holds you fast. If others are impacted by the betrayal you’ve suffered (like your children), it’s important to do all that’s within your power, to protect them.

4. Jesus was always gracious, even to Judas

After Jesus’ arrest, Judas knew he’d betrayed innocent blood and tried to return the money. Is it possible that in his mind he replayed the thousands of interactions he had with Jesus to find one good reason to hand him over? No matter how hard he tried to justify his actions, he knew Jesus had never done one evil deed or said one less-than-gracious thing to anyone (including himself).

Jesus, even knowing who Judas was, still washed his feet, and called him, “Friend.”

As impossible as it sounds, we are exhorted to respond like Jesus when we are mistreated.

If possible, so far as it depends on you, live peaceably with all. Beloved, never avenge yourselves, but leave it to the wrath of God, for it is written, “Vengeance is mine, I will repay, says the Lord.” On the contrary, “if your enemy is hungry, feed him; if he is thirsty, give him something to drink; for by so doing you will heap burning coals on his head.”

He Absorbed the Traitor’s Heel to Heal Traitors

Our response to this story should not just be to hate Judas (although his act is probably the worst in all of human history!). But we need to examine our own response to Jesus and the truth we’ve been exposed to.

I love the way Greg Morse said it (referring to Jesus’ response to Judas’ betrayal), “He absorbed the traitor’s heel, to heal traitors.”

We are traitors, the natural-born enemies of God. But Jesus was betrayed by man, so we wouldn’t be betrayed by God. We who were once God’s enemies have been reconciled to him through his death. (Romans 5:10). Isn’t that a glorious truth?

It’s because Jesus was betrayed, you and I don’t have to be. He walks towards us, his betrayers, and he extends mercy and grace. I pray you know this Jesus, and that his response to his betrayer, will inform how you (and I) respond the next time we’re betrayed.

Because he absorbed the traitor’s heel,

P.S. My friend Caitelen wrote and performs this moving song. I pray it causes you to marvel at the finished work of Christ on your behalf.