Hope for the Doubting Thomases of the World 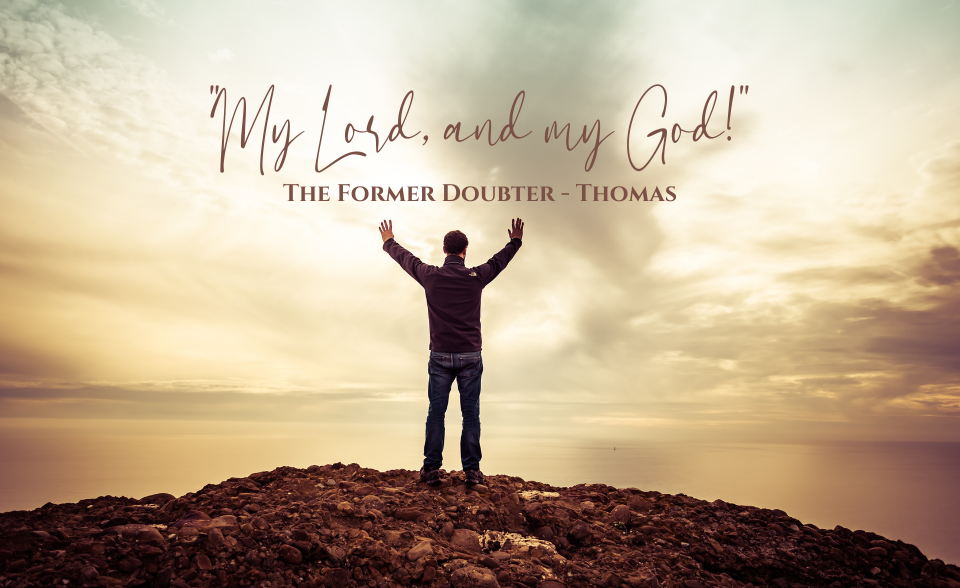 All Thomas wanted was to be alone. He didn’t know how to process Jesus’ horrific death, nor the fact that he ran away like a coward when he had promised he’d die with him. His failures and heartbreak were hard enough to sort through, so the last thing he wanted was to try to talk it over with the other disciples. So while they found comfort in gathering together in the upper room after Jesus’ death, Thomas went away to be by himself.

Thomas remembered the conversation of how he pledged his undying loyalty to Jesus. Lazarus had died, and Jesus wanted them to go to Bethany to be with Mary and Martha. But the disciples didn’t understand Jesus’ delay, or why Lazarus needed help “waking up,” or why Jesus would insist on going where they had already tried to stone him.

Let’s Go, and Die with Him

To the disciples, the trip seemed more dangerous than advantageous, but Thomas spoke up in favor of following wherever Jesus led. He said, “Let us also go, that we may die with him” (John 11:16).

Looking back, it probably came across more pessimistically than he intended it to. It wasn’t so much a statement of defeat, but resolve. Being misunderstood was nothing new for Thomas. More vocal disciples, like Peter, seemed comfortable in the spotlight and were able to express their thoughts whenever they came to mind. But Thomas was quieter and more contemplative, content with remaining in the background and blending in.

He knew these traits marked him as a pessimist. But a negative attitude didn’t rule his heart, love did. The last three years with Jesus had changed him, and if the price of devotion meant following Jesus to his death, Thomas was ready to lay it all on the line.

But when his test of devotion came in the Garden of Gethsemane, Thomas didn’t follow Jesus to his death, instead, he ran away in fear. Some brave follower he turned out to be! Being alone was what he thought he needed to deal with his grief, but as the days dragged on, he wondered if he’d isolated himself too long?

On Sunday evening the disciples (without Thomas) were huddled together behind locked doors, for fear of the Jews. Suddenly and inexplicably, Jesus appeared in their midst. His first words to the startled disciples were, “Peace be with you.” Then he showed them his hands and his side, and he breathed on them and gave them the Holy Spirit, and vanished as quickly as he had appeared.

Because of this statement, Thomas became known as, “Doubting Thomas.” It did seem like he genuinely rejected his friends’ convincing testimony that Jesus had risen from the dead and that he needed verifiable proof in order to believe. But could it be that we’re selling Thomas short?

Maybe his refusal to believe wasn’t because he doubted it was possible, after all, he had just seen Jesus raise Lazarus from the dead. But his pessimistic tendencies, coupled with his disappointment in his own cowardice, might have caused him to punish himself by refusing to believe the good news.

While the rest of the disciples went about rejoicing, Thomas wasn’t ready to celebrate just yet. His logical side needed time to line up with his emotional one. The proof of his devotion was in the profoundness of his despair.

After eight long days, Thomas finally joined his friends in the upper room when Jesus reappeared to meet with him personally. No one needed to tell Jesus what Thomas had said, for, of course, he already knew.

He approached Thomas and addressed the very points of his doubt, “Put your finger here and see my hands; and put out your hand, and place it in my side. Do not disbelieve, but believe” (26). In shock and glorious awe, Thomas responded with a beautiful declaration of belief, “My Lord and my God!” Jesus’ patience with Thomas led him from unbelief to belief.

Thomas believed because he’d seen, but Jesus spoke to us through him, when he said, “Have you believed because you have seen me? Blessed are those who have not seen and yet have believed” (John 20:29). There is an extra blessing for those who’ve wrestled with doubt and believed, having not seen or touched the scars.

Hope for Doubting Thomases of the World

If you find yourself with Thomas-like tendencies of doubt, pessimism, and melancholy, take heart in Jesus’ tender dealing with Thomas. Jesus didn’t rebuke his doubt but graciously met him in it. When the timing was right, he moved toward Thomas offering him the very evidence he needed to move from disbelief to belief. God can handle your doubts. Believing isn’t the absence of reason, but an acknowledgment that faith must extend past it.

Transformed by the resurrection, Doubting Thomas became Determined Thomas. History tells us he took the Gospel to the ends of the earth in India. Ironically, he who needed to see the spear mark on Jesus’ side to believe, was himself speared to death, fulfilling his resolution to go and die with Christ.

It’s been said the only man-made thing in heaven will be Jesus’ scars. Someday, all lingering doubt and pessimism will gloriously dissolve when our physical eyes lay hold of the Lamb as though he had been slain (Rev 5:6).

Thomas saw the scars and it was from his lips that came the strongest and most conclusive testimony of the deity of Jesus Christ. Let all those who doubt, meet Thomas. You can confidently put your faith in Christ and declare with all the former doubters of the world, “My Lord and my God!”

P.S. This concludes the Wonderous Cross series. I pray it blessed you! It’s never too late to download the accompanying coloring book! Stick around for next week, as we’re going to switch gears a little bit. 😉

We all love a good courtroom drama scene. But have

Are you waiting on God for something? We know he'

🌱CONVICTIONS & COMPROMISE🌱 Years ago, we ma

Are you looking for a resource to engage your kids

Friend, are you wasting your life for Jesus? Mar