Midnight at Noon & the Irony & Goodness of Good Friday 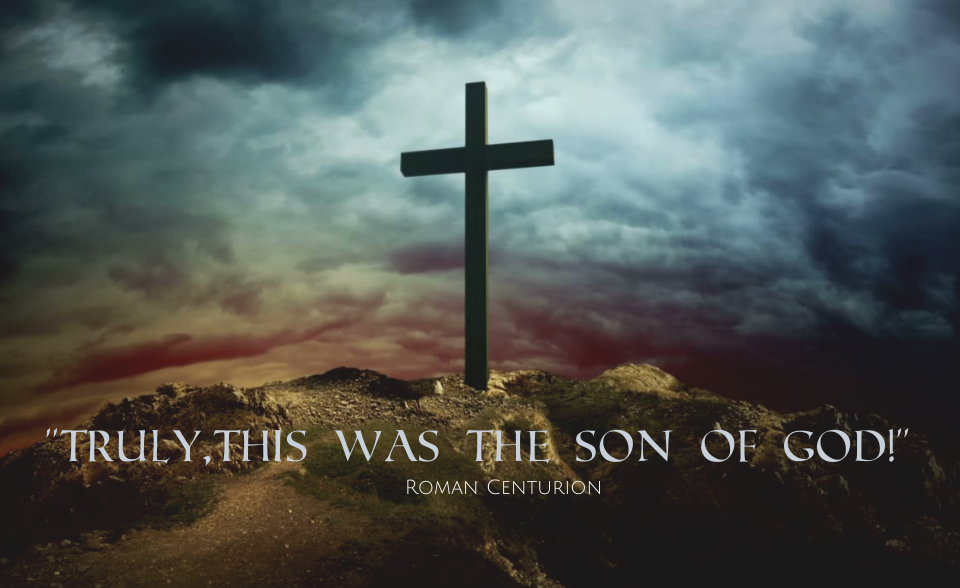 When the centurion and those who were with him, keeping watch over Jesus, saw the earthquake and what took place, they were filled with awe and said, “Truly, this was the Son of God!”

For hours, the centurion had been watching him die. Death, torture, and humiliation were his daily fare, but there was something very different about this man and this execution. The centurion was a hardened Roman soldier who had become immune to the sights and sounds of death. It was all in a day’s work, but it wasn’t every day, they put to death a so-called “king.”

What sort of king would end up on this God-forsaken hill to be crucified with robbers and insurrectionists? The centurion and his men reveled in stretching this ridiculous idea to its limit. At first, it was a game. What was a king without his royal garb? They found a faded purple cloak and threw it over Jesus’ lacerated back, twisted a crown of thorns and jammed it into his brow, and thrust a staff into his right hand as a scepter. What a pathetic joke! Their mockery and cruelty continued as they knelt before him and hailed him “king of the Jews.” Then they punched him and spit in his face, and led him away to be crucified.

A Death Unlike Any Other Death

At 9:00 a.m. the soldiers hoisted Jesus’ cross into its upright position. The centurion stood guard and pretended he wasn’t listening to the interactions happening around Jesus’ cross. He couldn’t help but notice Jesus’ uncanny and gracious responses to those who continued to hurl abuse and scorn at him.

While most criminals would yell back or defend themselves, Jesus prayed out loud, “Father, forgive them, they don’t know what they’re doing.” He even heard Jesus promise heaven to one of the two thieves when he said, “Today, you’ll be with me in paradise.”

Then at noon, when the sun was at its zenith, it suddenly became dark as midnight. This was not the kind of darkness that rolls in with an afternoon storm. The centurion had never seen or felt such penetrating, menacing darkness – especially darkness in the middle of the day!

Three hours later, darkness continued to cover the land. It had been six hours since Jesus’ crucifixion began. Crucifixion was designed to take a long time, and when the final throes of death mercifully came, the last moments were often uglier than those before it. The condemned men would suffocate as they pushed their weight up off their nail-driven feet to gasp their final breaths.

So the centurion was surprised, when only six hours in, with full control of his body and mind, Jesus yelled out with a loud voice, “It is finished!” and breathed his last. Instead of the normal death convulsions, the centurion was used to seeing, Jesus’ head gently sloped down, as if he was laying his head down to sleep.

Seconds later, the earth began to shake, and rocks all around Jerusalem split in two. A few miles away in the temple, the 60-foot tall, four-inch-thick veil that separated the Holy of Holies from the Holy Place was torn in two. As if God himself tore it in half, it ripped from top to bottom, making daily and yearly sacrifices no longer necessary, as the Lamb of God had just been slain once and for all. Later, reports were made by many eyewitnesses that men and women who had died long ago were raised from their graves and could be seen walking around Jerusalem.

Even the earth and the rocks were rent as the heavenly transaction was finalized on Calvary’s hill. When the earthquake stopped, the centurion exclaimed, “Truly, this was the Son of God!” Not only did this man die differently than every other man he’d seen die before, but all of creation agreed. The darkness, the earthquake, the veil splitting in two, and the dead being raised from their graves confirmed that this was no ordinary man, this was the Son of God.

The Ironies of the Cross

The irony of Calvary is that the place of death became a place of new life, for the thief, the centurion, and many of the soldiers who observed what happened. But the ironies don’t stop there.

Perhaps the greatest irony of all is that on the darkest day that has ever been, the day when it became midnight at noon, it was actually the very best day of all.

Good Friday is good because it was so very bad. It’s only by grace, that those who in their ignorance had been accomplices to his murder, were the first to be saved by it. They believed, and they didn’t even know Sunday was coming! How much more should we respond in faith to the goodness we see at the cross?

Salvation began that Good Friday right where the centurion stood: at the foot of the cross, and it still happens there today. Surely, he IS the Son of God! Surely it is a good Good Friday.

We all love a good courtroom drama scene. But have

Are you waiting on God for something? We know he'

🌱CONVICTIONS & COMPROMISE🌱 Years ago, we ma

Are you looking for a resource to engage your kids

Friend, are you wasting your life for Jesus? Mar