Paradise Found: The Thief on the Cross & You & Me 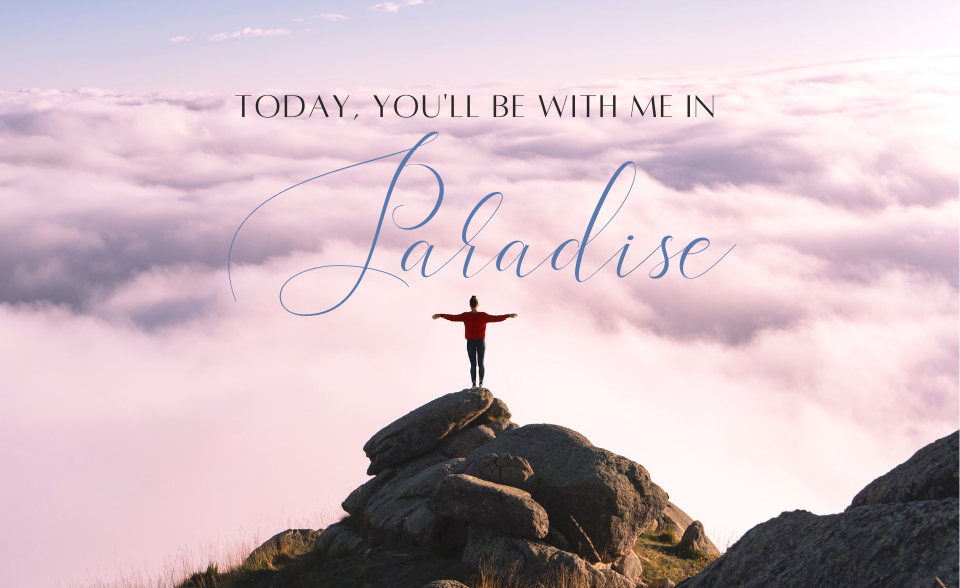 And he said, “Jesus, remember me when you come into your kingdom.”

And he said to him, “Truly, I say to you, today you will be with me in paradise.”

At first, he joined in the mockery. Why should he be punished, when Barabbas went free? If Jesus really was the Christ, why wouldn’t he save himself and the two criminals with him? Pain and anger seethed through his body like a forest set ablaze.

Then Jesus said something so outrageous that it stopped the thief’s rage like a campfire suddenly doused with water, “Father, forgive them they don’t know what they’re doing.”

All the profanities he was about to unleash, got stuck in his mouth. Something inside kept repeating, “forgive them.” He wished he could be rescued, but no one made it out of this torture alive.

His greatest need at that moment wasn’t deliverance…but forgiveness. Death’s march was in a full-out sprint headed towards him. The question that haunted him most was, “What’s next?”

No doubt, the thief had wasted his life. Who knew how many lives were ruined because of his greed and selfishness? Theft was what he was being punished for, but his rap sheet was probably much longer, and much much worse.

For his whole miserable life, he lived in rebellion against God. But in a rare moment of clarity, he looked out from the perch of his cross and saw through the way things appeared and saw them for what they really were.

On the surface, he saw all the conniving, self-righteousness, and blasphemy. The chief priests huddled together hurling insults at Jesus, and below him, the soldiers laughed and gambled for his garments. A group of women was weeping at Jesus’ feet, and casual passersby hurled even more abuse in Jesus’ direction.

But beneath all the commotion, he knew he deserved this ridicule and torture, and Jesus did not. He had heard the charges, and read the sign Pilate nailed above his head. Somehow, he knew Jesus was the King of the Jews. For the first time in ages, he felt a flicker of hope welling up in his soul.

If Jesus was willing to forgive those who were crucifying him, maybe he’d forgive him too?

The Way to Paradise Made Clear

In a few truth-crystallizing moments before his last breath, the thief’s few words revealed a lot of biblical truth. The Spirit gave him enough understanding, to be saved.

Here, in the midst of all mockery, is the most profound example of grace in all of Scripture. When it looked like death had won, and God was defeated, the tables were being turned.

The way things appeared, was not reality. By not saving himself, Jesus was saving the thief, and he was saving you and me. The sinful dying man called out to the sinless Savior, and said, “Yeshua, will you remember me?”

Jesus slowly turned his head to look the thief straight in the eyes, lifting the corner of his mouth ever-so-slightly, and said…

“Truly, I say to you, today you will be with me in paradise.”

The thief’s greatest fear was relieved, and his final victory won. His eternal destination switched and secured. He did nothing to aid in his salvation, and yet Jesus knew he believed, and saved him.

Does that mess with your theology, maybe just a little bit?

There was nothing the thief did to be a part of this transaction. He didn’t get baptized or take communion. He didn’t walk an aisle, raise his hands, or sign a decision card. He didn’t say the sinner’s prayer, go on the mission field, or tithe a tenth of his salary. He didn’t volunteer at the church, lead a small group, or prove his devotion with good attendance.

The thief had absolutely nothing to offer, and nothing to show for his salvation. He couldn’t even fold his hands to pray, but Jesus told him “Today, you’ll be with me in paradise.”

Like the thief, your hands and mine are open and empty. We can’t bring anything or do anything to help in this holy transaction. Someday, if an angel at the gates of heaven ever asks you, “Why should you be allowed in?” The answer can’t be that you did anything to deserve entrance. Like the thief, you can say, “Because the man on the middle cross said, I could come.”

Because the sinless Savior died,

My sinful soul is counted free

For God the Just is satisfied

To look on Him and pardon me

The same offer to the thief is the same offer to you and me. “Today, if you hear his voice, do not harden your heart” (Psalm 95:7b-8a). Today is the day of salvation. Salvation is all a work of his grace. Nothing in my hands I bring, simply to the cross I cling.

Pardoned by his grace,

P.S. The thief reminds us there is no life, God cannot save. If you’re feeling a tug on your heart, I encourage you to spend a few moments reading these verses and believe and receive this great salvation.