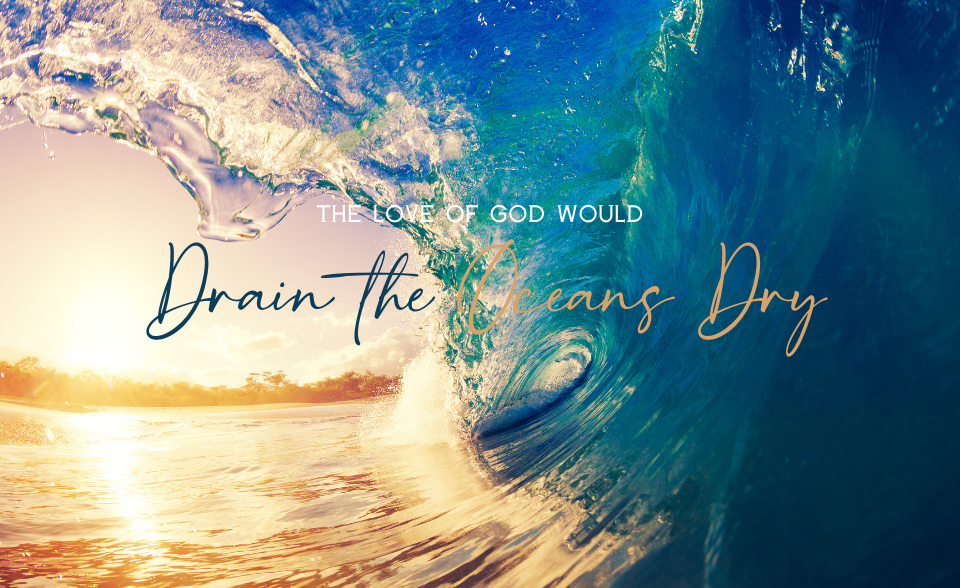 The prison guard moved around the empty cell layering mint green paint over the graffiti-filled walls. It was part of his job. When one inmate died, and before the next one moved in, the walls were repainted, erasing any evidence of the previous inmate’s oftentimes disturbed mental state. The guard had seen all manner of vile scribblings on the prison walls before, and he normally didn’t read any of them, but as he painted, something caught his eye. His paintbrush stopped, and he read…

“Could we with ink the ocean fill,

And were the skies of parchment made;

Were every stalk on earth a quill,

And every man a scribe by trade;

To write the love of God above

Would drain the ocean dry;

Nor could the scroll contain the whole,

Though stretched from sky to sky.”

The guard was so captivated by the beautiful words, he copied them down before paint would have erased them from history. For two hundred years, those words remained unpublished, but somehow, miraculously, passed down from one generation to the next.

In 1917, an American composer named Frederick M. Lehman was writing a hymn on the love of God, and he needed one final stanza to complete his song. For weeks he wrestled with finding the words to convey the magnitude of it all. Then one day he remembered a card a friend had sent with the anonymous prisoner’s poem. Lehman added those now-famous words to what has become one of the most beloved hymns of the Church, The Love of God.

Unbounded Love from Behind Prison Bars

Thousands of years before, another prisoner wrote of the limitless love of God. In his letter to the Ephesians, written from a Roman prison cell, Paul prayed that they might, “have strength to comprehend with all the saints what is the breadth and length and height and depth and to know the love of Christ that surpasses knowledge” (Ephesians 3:18-19).

The Ephesians wrote to Paul to express their concern for his well-being. His response was an epistle concerned for their joy. He wanted them to understand their unfathomable riches, and be transformed by the glorious truths of the love of God.

But Paul was not concerned the Ephesians would be able to intellectually explain God’s love. He wanted them to know it experientially. This is no contradiction at all. For when we experience God’s love, we become like the anonymous inmate. We realize there are not enough stalks, ink, parchment, or sky, to adequately describe it. It really does surpass knowledge.

How can we comprehend something that has no breadth, length, height, or depth? It seems like an impossible task, but God gave us a foretaste in the most famous verse of the Bible.

“For God so loved the world (breadth), that He gave His only begotten Son (length), that whosoever believes in Him shall not perish (depth) but have everlasting life (height)” John 3:16.

The breadth of the love of God

For God so loved the world. The word ‘world’ means, you guessed it, the whole wide world. The love of God reaches out to all the souls from every continent, village, place, and time. The breadth of God’s love reaches as far as it does wide. It offers unconditional love to the most vile, antagonistic, and blasphemous men and women. He offers it to you and me, and this is the love of God.

The length of the love of God

That he gave his only begotten Son. There was no length God would not go to prove his love for us. He gave his most treasured possession, his Son, who was begotten, not made, to redeem sinful humanity. Jesus lived a sinless life and paid the debt we owed and could not pay (1 Corinthians 15:20-23, Romans 6:6). God gave his Son for you and me, and this is the love of God.

The depth of the love of God

That whosoever believes in Him shall not perish. The ‘whosoevers’ can place their faith in the Son’s sacrifice on their behalf. The wages of sin is death (Romans 6:23). But no life is so far gone he cannot still reach further down to redeem. We who believe, are the whosoevers, and his love has reached down to us. This is the love of God.

The height of the love of God

But have everlasting life. The destiny of those who receive this free gift of salvation is eternal bliss. For endless days we will experience unfathomable delights, and never again experience death, mourning, crying, or pain, for the former order of things will have finally passed away (Revelation 21:4). We will forever be with the Lord, and this too is the love of God.

The Love of God Changes Us

How can we comprehend that which surpasses knowledge? It begins the moment you become part of the “whosoever believes.” When we know it, we join the saints and sing, “The love of God is greater far than tongue or pen could ever tell. It goes beyond the highest star and reaches to the lowest hell.”

This love frees captive souls who live behind bars, and who live in the suburbs. I hope you know this immeasurable, boundless, shoreless, bottomless, unfathomable love. It’s worth trying to comprehend, but it’s better to experience it for yourself. For God so loved YOU that he gave.

Here’s Fredrick Lehman’s masterpiece, The Love of God, performed by Mercy Me.