Good News of Great Joy That Will Change Your Life Forever 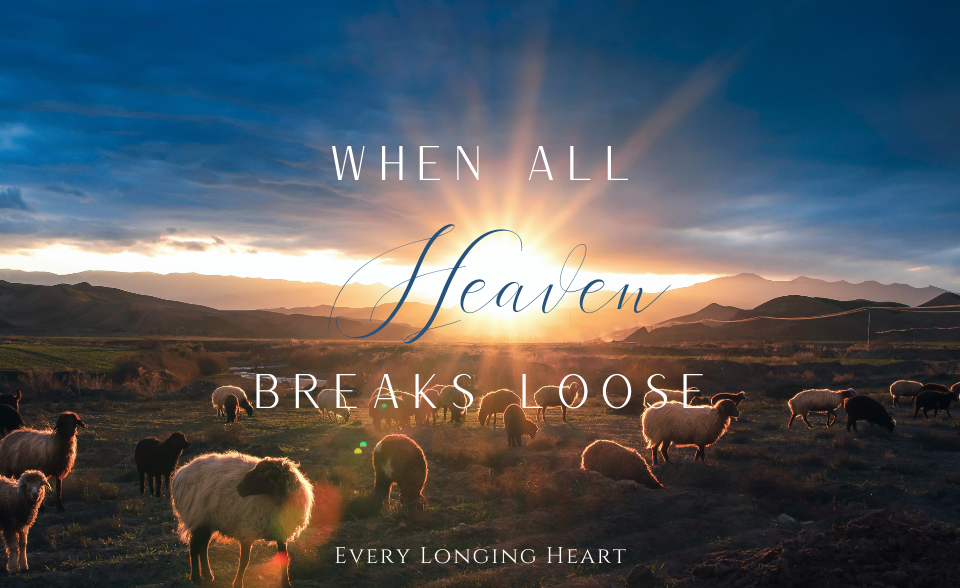 “Now there were in the same country shepherds living out in the fields, keeping watch over their flock by night. And an angel of the Lord appeared to them, and the glory of the Lord shone around them, and they were filled with great fear.”

It had been a night like a thousand nights before it. A band of shepherds gathered around the glow of the campfire to tell stories and sing songs. But a heavenly announcement came that changed this ordinary night into the most extraordinary one. Suddenly, the sky split open and the blazing glory of an angel blinded their eyes and filled their hearts with terror.

Perhaps this scene has become so familiar that it no longer captures our imaginations and our hearts the way it should. For a moment, can you strap on the shepherds’ dusty sandals and stand in awe of what they saw?

One minute, the dark night sky was their backdrop, the next they were shielding their eyes from the piercing bright light. Surrounded by the glory of the Lord they saw an angel (probably Gabriel) announcing the good news of Christ’s birth, followed by an encore of hundreds of thousands of angels singing their praise to God.

The whole scene must’ve been like a curtain peeling back just enough to give the shepherds a glimpse of the ongoing worship concert of heaven. It was the most outrageous, over-the-top display of glory, praise, and splendor the world has ever seen. Most scandalous of all, this news was not revealed to religious scholars, or kings and queens, but to a lowly group of shepherds.

God has always had a soft spot for shepherds. Israel’s greatest king, David, was a shepherd and Moses served his father-in-law as a shepherd for a time. Despite some big names in their ranks, shepherds were as close to the bottom rung of the social ladder as you could get. They were the blue-collar workers of the day, whose work made them ceremonially unclean and unable to participate in the rituals of Judaism.

Yet, it was to these anonymous, and maybe devout, shepherds God revealed this groundbreaking news. These poor in spirit shepherds literally received the kingdom of heaven when they saw the glory of the Lord, the angelic choir, and the newborn King (Matthew 5:3). These nobodies were a perfect illustration of how we are to receive the good news of the kingdom. For as soon as they heard it, they made haste to go find the Child, and when they had seen Him, they made it widely known (Luke 2:17-20).

Good News for the Rest of Us

Gabriel had told them, “Fear not, for behold, I bring you good news of great joy that will be for all the people. For unto you is born this day in the city of David a Savior, who is Christ the Lord” (Luke 2:10-11).

That God would choose to share this news with the shepherds first, is good news for us. For not many are wise according to worldly standards, or powerful, or of noble birth (1 Corinthians 1:26). Most of us are common people, not altogether different from the shepherds (except we hopefully smell better). If God wanted them to experience great joy at the announcement of Christ’s birth, then it holds that he wants it for us too.

“We need not wonder at these words. The spiritual darkness which had covered the earth for four thousand years, was about to be rolled away. The way to pardon and peace with God was about to be thrown open to all mankind. The head of Satan was about to be bruised (Genesis 3:15). Liberty was about to be proclaimed to the captives, and recovering of sight to the blind (Luke 4:18). The mighty truth was about to be proclaimed that God could be just, and yet, for Christ’s sake, justify the ungodly (Romans 3:26). Salvation was no longer to be seen through types and figures, but openly, and face to face (Colossians 2:16,17). The knowledge of God was no longer to be confined to the Jews, but to be offered to the whole Gentile world. The days of heathenism were numbered. The first stone of God’s kingdom was about to be set up. If this was not “good tidings,” there never were tidings that deserved the name!

J.C. Ryle on the Gospel of Luke

This good news has ripple effects into every nook and cranny of our lives. It speaks to every longing of our hearts, the state of the world, and the future (which are all in God’s hands). Let these glad tidings be like the stones Ryle refers to, in your life, settled and stacked firmly around your heart. The more gospel stones we build our lives upon, the happier we are, regardless of what storms we face.

The Irony of it All

I love a story with irony and contrast, and this story is no exception. A dark starry night sky is broken by blinding glorious light. Terror-filled men confronted with exuberant and happy angels, and simple shepherds transformed into evangelists. And most ironically of all, this glorious announcement came to shepherds who were probably tending a flock of future sacrificial lambs. In their haste to see the Child, could they have known they were beholding the final perfect sacrificial lamb – the Lamb of God?

The angelic announcement shocked the shepherds and changed their lives forever. Let this familiar story fill your heart with awe and wonder this Advent. Jesus is the Lamb of God who takes away the sins of the world. This is the good news that brings us the greatest joy, now and forever.

P.S. Subscribe below so you receive every devotion in this series. Get caught up on what we’ve covered so far here.

P.P.S. Speaking of the shepherds…no one tells their story better than The Chosen. Enjoy this short video.